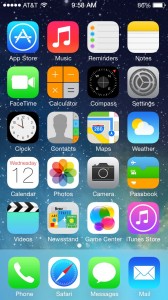 There’s been a lot of talk about iOS7 over the past few months and last week it finally launched. Lots of people won’t update yet but working in the web design and iOS design industry you kind of have to. So I did. To be honest I find it messy and cheap looking. The famous gradient icons just don’t seem to work in places especially on the dock with certain colours. The dock – annoyingly (why can’t we choose a colour for the dock?) – takes on an automated colour based on your wallpaper image and sometimes that colour clashes badly with the icon gradients making them blend into the background and look really nasty. On my iPhone only dark backgrounds seem to work well. Anything in a mid tone fights with the icon colours too much. And those folder icons are the same, they take on an automated colour that just doesn’t seem to work and they look a mess. With all the emphasis on nice transparent layers in iOS7 I would have thought that some transparency on the folder and dock backgrounds would have looked very nice.

Another thing that adds to the messy feel of the app screens is the padding around app names. A lot – far too many for my liking – of the app names on my iPhone touch each other. It’s as if there’s not enough padding on the grid and names are overflowing into each other. Now come on, any web designer knows that padding should be set so that grids flow nicely and text names don’t touch or overlap. On every project we do at kc web design kent its one of the THE most basic things to get right.

The icons on my phone look really inconsistent because many apps haven’t updated their icons to the new style. I guess this is only a matter of time and once developers update their icons it will feel more consistent but it shows that the new iOS7 isn’t very forgiving. Because of its very unique style anything that doesn’t use that style now looks out of place. Surely the iOS should facilitate a certain amount of freedom and not dictate what looks good. The old iOS6 seemed to deal with this a lot better and the vast array of different styled icons still looked ok on the screen.

And fonts, oh those fonts. I don’t actually mind the Helvetica Neue, it looks quite nice, but in some places the size is too small and the weight is very light. On some apps the icons at the bottom have text underneath and they’re barley readable. So many people I know that wear glasses find them unreadable. Again, this is basic design stuff and Apple should have got this right.

I know these seem minor gripes but as a web designer at kc web design kent I have to deal with and make sure these types of design rules are done right every day, and I make sure they are. Apple, with all that man power and money, could surely do the same. At kc web design kent I’m looking forward to working on our next iOS app design project so that I can play around with the new styles.

Lets hope some updates appear over the coming months that fix these teething problems. And on a brighter note, lets not forget that iOS7 is a huge update and a massive leap forward for the worlds leading mobile OS. When I think back to the first iOS it was revolutionary, but it had a lot of issues too. It took a few years and a few iOS updates for it to feel like a proper iOS and I feel iOS7 is the same. It’ll mature and grow over the next few years.