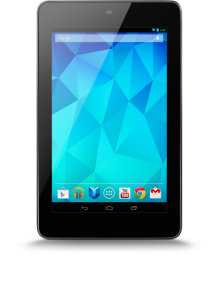 First good thing I have to say about the Nexus 7, and more specifically about Google, was the delivery was super fast! Ordered 1 day, came the next, even though the order stated 2/3 days. Well done Google, have a +1. The Nexus 7 comes in a very well packaged box with the bare minimum of accessories: the tablet, charger and small booklet…no sign of a screen cloth though which I would consider to be an essential accessory for a touch device. After a quick charge the Nexus 7 started up and straight away notified me of an OS update which I agreed to. It then restarted pretty quickly and setup the update which then allowed me to access the device properly. On first look it seems like a really nice small tablet. It’s responsive to touch commands and the Android OS feels quick and fluid once you get used to it (which took a while after using so many Apple devices…I kept going for that home button!). After about 30 mins of using it I got another OS update notification so I agreed and it was installed. And 30 mins later another one, to update to Android 4.2, which is hopefully the last update and the Nexus is now on the latest version.

As the Nexus 7 will be used purely for testing I went straight to the browser and looked at a few responsive web designs we’ve done here at kc web design kent and straight away it showed that no matter how good you think you’re media queries are, there’s always a device where your responsive website design doesn’t look quite right. Because of the screen size of the 7″ Nexus the portrait and landscape sizes fall between some widely used media queries and so a few sites needed some tweaks. This just shows the importance of testing on real devices and is the reason why we’re gathering a suite of devices to test on at kc web design Kent.

After using the Nexus 7 for a day or so I think its pretty good. Once you get used to a different OS and different way of navigating around it becomes fairly intuitive, although I still keep going for that home button. It still makes me think that Apple have got it right but Android aren’t far behind and the Nexus is a good device and a very good price.

If you’d like more information on responsive web design or how your website can be adapted to work on all major mobile devices then give kc web design Kent a call.