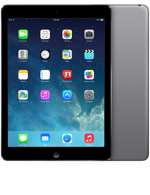 My ageing original iPad 1 is still going strong but has slowly been relegated from a work device to a kiddies play thing so it was time for a long overdue upgrade. The original iPad isn’t supported in the latest OS’s and so trying to test new iPad apps we’re designing at kc web design kent was proving a little tricky. I’d been reluctant to fork out for a new iPad this year knowing that a new iPad would arrive at the October Apple event so I’ve been waiting and waiting until now.

It was a tough choice between the new iPad Air and the retina iPad mini but having had a Nexus 7 in the office for a while now I decided that the small size was nice but not a practical for working on as the larger screen. The iPad Air seemed a great half way house as its screen is bigger but it’s considerably lighter than any other 10″ iPad.

What! No screen cloth!

As soon as the new iPad Air was available I grabbed one from the Apple store along with a case and it turned up at the kc web design kent studio a few days ago. It’s a lovely piece of kit – as you’d expect from Apple – and its size and weight feels perfect. The lightness makes it easy to hold and use and it really doesn’t feel much heavier in use than the first gen Nexus 7. One thing that was noticeably missing from the box though was a screen cleaning cloth! Every other Apple device I’ve bought has come with a cloth – even my giant 27″ iMac that we use in the kc web design kent studio has a small cloth! – so an iPad without one felt a little harsh, especially when paying a premium price. The stickers were there (I must have about 20 of these now and no idea what to do with them!) but now screen cleaning cloth – that’s a bit mean Apple!

I’ve not been a massive fan of iOS7 but I have got used to it now on my iPhone. There have been reports of it not working to well on the iPad but the iPad Air feels very nice. I think the ultra fast processor helps make iOS7 feel very fluid and tactile and whizzing around between apps using the multitouch gestures makes working very easy.

Having not used the old iPad very much for work over the last year or so at kc web design kent having the new iPad Air around and using it for more work related tasks feels great. It gets me away from the desk a bit more which is always nice! So, all-in-all it’s the perfect iPad – light, fast, slick and a joy to use. Just what everyone expected!